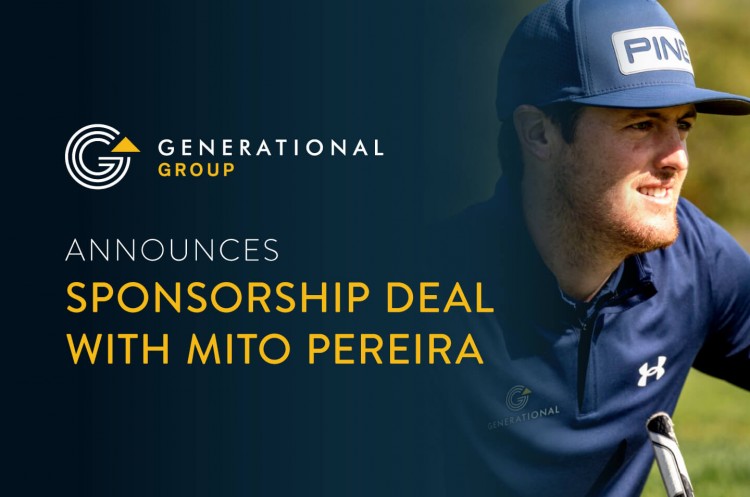 In his first year on the PGA TOUR, Pereira is 32nd in FedExCup Rankings and will be featured in an upcoming Netflix documentary; Pereira joins Jack Nicklaus among Generational Group’s ambassadors

We are pleased to announce that Generational Group has signed a global endorsement agreement with touted rising PGA TOUR professional, Mito Pereira.

Pereira made an impressive leap to the PGA TOUR for the 2021-2022 season, becoming the first golfer since 2016 to win a "battlefield" promotion recognizing his 3 victories on the Korn Ferry Tour. Since earning full TOUR status, Pereira has recorded four worldwide top-10 finishes – including a tie for sixth at the 3M Open and a third-place finish at the Fortinet Championship.

Though on the PGA TOUR for only a few short months, Pereira is currently ranked 32nd in the 2022 FedExCup Rankings.

“I am excited to be associated with Generational, one of the leading M&A advisory firms in North America,” Pereira said.

“Their track record of success in helping business owners is really inspiring. Aiming to be the best in their field and doing so with character is easily relatable to my approach to my career. I’m looking forward to meeting Generational clients as I travel the country. I know it will be exciting to hear the stories of the differences they have made in their clients’ lives.”

“I am also pleased with the way the firm gives back to the community. I look forward to being part of their many charitable events.”

Pereira will be featured in an upcoming Netflix documentary series that follows the lives and stories of a select group of PGA TOUR professionals. Golf’s governing bodies are providing unprecedented access for this series, and Pereira is the only rookie currently participating.

Ryan Binkley, President & CEO of Generational Group said, “We are thrilled to establish a relationship with such a rising and talented PGA tour pro like Mito. We look forward to a long and beneficial relationship with him and are excited to watch his continued success.”

Binkley added, “We are also pleased to be associated with an individual with the character and values that Mito has and that we share as a firm. We believe that Mito will be an outstanding representative of the Generational brand.”

Aligned With Golf’s Legendary Past… and Its Bright Future

The addition of Pereira as the newest member of the Generational Group team links the impressive rookie with the legendary Jack Nicklaus, who in March of 2021 formed a unique corporate alliance with Generational Group.

Generational is also working with Nicklaus Companies to develop a five-year strategic growth plan for Jack’s companies, as well as with business development and lead generation for Nicklaus Design, the renowned Nicklaus golf course design company.

Pereira was born in Santiago, Chile and attended Texas Tech University. In late 2015, he joined the professional circuit. One year later, Pereira joined the PGA Tour Latinoamérica, where he won the Roberto De Vicenzo Punta del Este Open Copa NEC and managed to reach the top spot of the Order of Merit.

As a result, he became the youngest player ever ranked No. 1. In addition, he had two runner-up finishes and four top-10s in 18 starts. Pereira ended the season ranked No. 3 on the Order of Merit, advancing to the 2017 Web.com Tour.

At the 2019 Pan American Games, Pereira won the bronze medal in the men's individual competition. On the 2020-21 Korn Ferry Tour, he won the Country Club de Bogotá Championship in February 2020. With back-to-back victories at the Rex Hospital Open and BMW Charity Pro-Am in June 2021, he earned an instant promotion to the PGA Tour.

Pereira became the 12th player in the developmental tour's history to earn the automatic three-win promotion, and the first since Wesley Bryan in 2016. In August 2021, he finished in a tie for 3rd place at the Olympic Games representing his home country Chile.