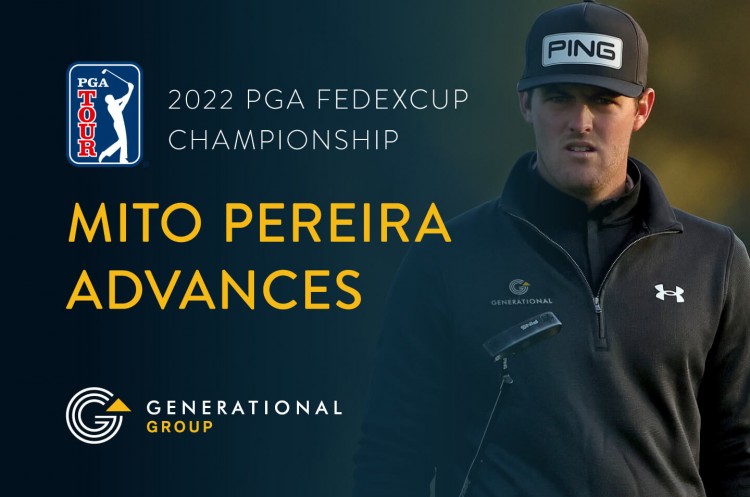 Generational Group, a leading middle market investment bank for privately held businesses, is pleased to congratulate Mito Pereira, a Generational sponsored PGA Tour golf professional, who has advanced to the BMW Championship in the FedExCup Playoffs.

Pereira finished 5 under par against an impressive field of competition last week in the St. Jude Championship and advanced to the next round of the FedExCup Playoffs. Pereira will now join 69 other top performers at the BMW Championship at the Wilmington Country Club in Delaware. Based on his St. Jude results, Pereira is now ranked 42nd, with 938 points in the latest FedExCup standings.

Ryan Binkley, President & CEO of Generational Group said, “It has been thrilling to watch Mito develop as a player in 2022. He's achieved fantastic results on the tour this season, and we are proud to have him as a Generational brand ambassador.”

Binkley added, “Mito’s excellence and diligence are a perfect reflection of the Core Values we strive for every day at Generational. We are looking forward to the BMW Championship this weekend and will be cheering him on as he competes in the second round of the FedExCup Playoffs.”

Pereira was born in Santiago, Chile and attended Texas Tech University. In late 2015, he joined the professional circuit. One year later, Pereira joined the PGA Tour Latinoamérica, where he won the Roberto De Vicenzo Punta del Este Open Copa NEC and managed to reach the top-spot of the Order of Merit.

As a result, he became the youngest player ever ranked No. 1. In addition, he had two runner-up finishes and four top-10s in 18 starts. Pereira ended the season ranked No. 3 on the Order of Merit, advancing to the 2017 Web.com Tour.

At the 2019 Pan American Games, Pereira won the bronze medal in the men's individual competition. On the 2020–21 Korn Ferry Tour, he won the Country Club de Bogotá Championship in February 2020.

With back-to-back victories at the Rex Hospital Open and BMW Charity Pro-Am in June 2021, he earned an instant promotion to the PGA Tour. He became the 12th player in the developmental tour's history to earn the automatic three-win promotion, and the first since Wesley Bryan in 2016. In August 2021, Pereira finished in a tie for 3rd place at the Olympic Games representing his home country Chile.

Pereira made an impressive leap to the PGA TOUR for the 2021-2022 season, becoming the first golfer since 2016 to win a "battlefield" promotion recognizing his three victories on the Korn Ferry Tour.

Since earning full TOUR status, Pereira has recorded several top-10 finishes — including a tie for sixth at the 3M Open, a third-place finish at the Fortinet Championship, a tie for 7th at the Charles Schwab Challenge, and a third-place tie in the 2022 PGA Championship.

Pereira will be featured in an upcoming Netflix documentary series that follows the lives and stories of a select group of PGA TOUR professionals. Golf’s governing bodies are providing unprecedented access for this series, and Pereira is the only rookie currently participating.